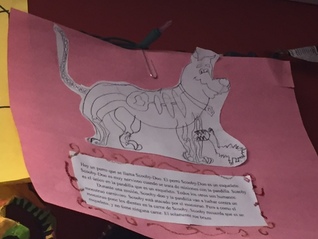 ​Calaveras Literarias are traditional at Dia De Los Muertos because they are originally intended to humorously castigate the livings integrity. They appeared when drawings of important politicians became published to the press, and the livings disposition was presented as skeletons portraying recognizable traits making them easy to identify.
My Calavera was about the infamous cartoon character, Scooby-Doo. In my calavera, I wrote about how Scooby is a skeleton and he is the only skeleton in the gang, but when it comes to missions with the gang, Scooby is a tad bit too nervous about everything. During one mission, Scooby somehow separates from the rest of the gang, and goes head to head with the flesh eating monster, but just as the monster sinks it's teeth into Scooby, they both realize that Scooby has no flesh to be eaten, so really, all the monster does is gnaw on Scooby's arm bone.I think I was pretty successful, and I am so grateful for word reference, because without it, I don't know what I would of done. Although, what I would do differently next time would be to put a little more thought into building it, and not just choosing something at the top of my head and not looking into it too much. I chose Scooby-Doo because I figured it was the perfect time to display a monstrous creature (who Scooby goes up against) just in time for Halloween.
Powered by