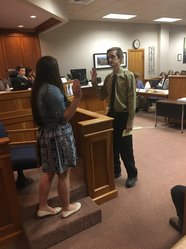 ​​For this project, Ally’s humanities class first started reading the book “Things Fall Apart” by Chinua Achebe, that takes place on the Gold Coast, which is now known as Nigeria. Throughout this book, we got to know and understand Okonkwo, the main character and his struggles in his clan when the British Empire arrives, and even before they arrived. With this project we got to explore the different perspectives of the people of Umuofia and the British Empire. We later conducted a case with The People of Umuofia vs. The British Empire, trying to prove that the British had a hand in Okonkwo’s death and that after they arrived was when things started to fall apart.

In this trial, I got to play Ekwefi, Okonkwo’s second wife. In this role, I had to sit in the witness box and talk about how Okonkwo was as a person, father, husband, and clan member. One question that I got asked was, “ How would you describe Okonkwo’s character?” I was glad that I got asked that question, because not only was I able to talk about how Okonkwo was a strong and honorable man, but I also got to talk about how much he loved his culture and respected his elders, which I thought was able to prove a point that Okonkwo wouldn’t commit suicide based on himself, especially considering that suicide is a sin so grave in his culture. I was also able to point out that Okonkwo was temperamental and did have an aggressive view on the world- he just wants to take action, and he was only aggressive because he cared. I thought that was good to point out because it was owning up that Okonkwo wasn’t always sunshine and butterflies, and that he did have a temper, but it was mainly good intentions for what he thought would better benefit the clan and his society.

​  During this project, I got to strengthen my research skills. Whether that research came from the book, or the internet, I had to entail a lot of research for this project so I could get deeper into detail and allow the audience to understand what kind of man Okonkwo was. One piece that took a lot of research was how suicide is viewed in the Igbo culture, “Suicide in my culture is a sin so grave that it is considered to be against earth itself. This kind of death makes the person unable to reincarnate because it disrupts the cycle and they are to be buried in the evil forest.” This information was essential to my trial because it allowed me to portray how much of a sin suicide in Okonkwo’s culture is, while also talking about how much their religion and the culture meant to him, hopefully helping to prove that Okonkwo wouldn’t commit a sin like that. Unless it was instigated or seemed like it was the only statement he could make to have people listen and open their eyes to see what was happening to their culture, I have firm belief he didn’t do it solely because he was an unstable man.

Indissoluble understandings that I took away from this project is that the British essentially went into Africa expecting to change and alter the Africans religion, pretty much without the Africans consent. I got to expand my knowledge on how the African borders were created from the Berlin Conference and racial categories. I also got to learn about the Industrial Revolution, Nationalism, Partition for Africa, the Scramble for Africa and much more. I had the opportunity to comprehend what it was like for the Africans when they were invaded by foreigners in their culture, and allowed a little glimpse as to how they were treated. After this project, I can say that I am able to confidently reflect back and see how much we have grown with racism, but I can also see that we have a lot more improvements to make in order to make a real change.
Powered by